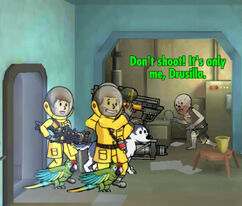 “War vs. Pestilence vs. Famine. Warshippers vs. Pests vs. Hungry. Everyone's arrived at Vault 226, ready to fight, but we shouldn't leave anything to chance. Let's wade through the carnage and make sure none of the Horsemen survive!”

Knock 'Em Down is an overseer quest and part of the Horsemen of the Post-Apocalypse Part 3 multistage questline in Fallout Shelter.

This quest has mole rats, radroaches, radscorpions, ghouls, and raiders in radiation or wasteland suits as enemies. Famine is an irradiated ghoul with two additional ghouls. Pestilence is a lone irradiated radscorpion, watch out for its lunge attack. War is a raider leader in power armor and wields a mini gun, and has the standard bomb attack that raider leaders have.

Rewards
Add an image to this gallery
Retrieved from "https://fallout.fandom.com/wiki/Knock_%27Em_Down?oldid=3204644"
Community content is available under CC-BY-SA unless otherwise noted.