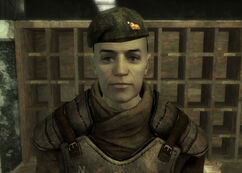 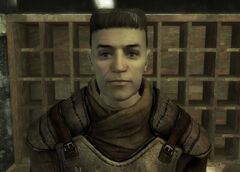 “Me, I'm Knight - Major Knight. I've been stuck here dealing with these caravans for ages now, but somebody's gotta do it.”

Major Knight is an NCR Army officer living at the Mojave Outpost in 2281.

Major Knight is stationed at the Mojave Outpost. His main role is to repair the troopers and travelers' weapons and armor in exchange for caps. His Repair skill is at 100 percent and, as such, he will repair equipment to maximum condition, though this can be expensive.

The Confirmed Bachelor perk will also grant unique dialogue options with Knight, in which the Courier can come on to him, although he begrudgingly denies the advances. He also says that the soldiers in the Mojave Outpost seem to frown upon same-sex relationships ("friendships" as Knight refers to it.)

* He will have caps one has spent on repairs.

Retrieved from "https://fallout.fandom.com/wiki/Knight_(Fallout:_New_Vegas)?oldid=3133019"
Community content is available under CC-BY-SA unless otherwise noted.