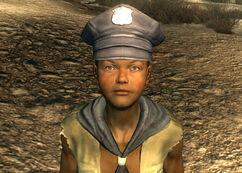 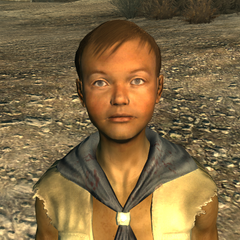 “New in town, huh? If MacCready let you in, that's good enough for me.”

Knick Knack and his twin sister, Knock Knock, are 14 years old and dedicated to the town. While his sister collects terrible jokes, Knick Knack collects anything of value. He organizes the settlement's store of goods, mostly to keep them in good shape for anyone who needs them, but also because he has a fondness for working with items and making sure everything is "just so."[1]

His name was originally Nick (or Nicholas) and he eventually changed his name to Knick Knack to reflect his habit of collecting odds and ends (knick-knacks).

He is in his store behind the counter until night when he is in his bed.

Knick Knack will give Lone Wanderer a discount if they have the Child at Heart perk.

Knick Knack appears only in Fallout 3 and is mentioned in Fallout 4.[2]

Knick Knack concept art
Add an image to this gallery

Retrieved from "https://fallout.fandom.com/wiki/Knick_Knack?oldid=3248530"
Community content is available under CC-BY-SA unless otherwise noted.