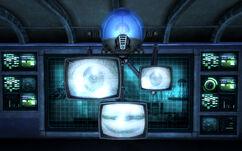 “ATTENTION: BIG MT. THIS IS AN URGENT MESSAGE. IF YOU HAPPEN TO SEE A GECKO... ECKO. ECHO? ECH-O. ECHOOOO. ECHOOOO.”

Doctor Klein is a pre-War scientist and leader of the Think Tank operating the Big MT in 2281.

Doctor Klein is a pre-War doctor and the chief/head researcher of logistical operations and ideology at Big MT. Sometime after the Great War, he became a think tank to continue his work at Big MT. He seems to be overconfident in his intelligence, as he shows absolutely no grasp of the purpose or function of the advanced technology he tasks the Courier to retrieve.

Along with his original name and human memories, Klein has lost much of his knowledge of human anatomy, and refers to the Courier's fingers and toes as "penises". He is shown to fear and hate Dr. Mobius, although they were partners at one time. He seems to hold his colleagues in low regard, often ignoring their advice. At the end of Old World Blues, it is revealed that he and the think-tank stole the Courier's brain in order to escape their imprisonment in Big MT and go into the Mojave to conduct ruthless experiments on both the Wasteland and its denizens, much like the implementation of the Cloud in the Sierra Madre to test the chemical, hazmat suits and Auto-Doc technology.

Klein before becoming a think tank.[1]
Add an image to this gallery

Retrieved from "https://fallout.fandom.com/wiki/Klein?oldid=2837093"
Community content is available under CC-BY-SA unless otherwise noted.