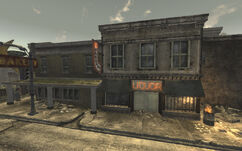 “I run the liquor store in Westside. With things this rough, some folks need a lot of booze just to step out the door in the morning.”— Klamath Bob

Klamath Bob's liquor store is a business in the Mojave Wasteland in 2281, located in Westside.

Display shelves filled with alcohol and chems, all of which can be stolen or purchased, are situated in neat rows within the store. wine, whiskey, scotch, vodka, beer and purified water can all be found in abundance here.

Nuka-Cola Victory - Leaning on the freezer.

It is possible Klamath Bob is based on a character in Fallout 2, called Whiskey Bob. He resided in the town of Klamath and ran a secret whiskey still. 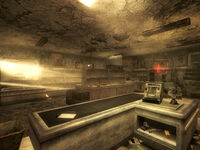 Store's interior
Add a photo to this gallery
Retrieved from "https://fallout.fandom.com/wiki/Klamath_Bob%27s_liquor_store?oldid=3424572"
Community content is available under CC-BY-SA unless otherwise noted.