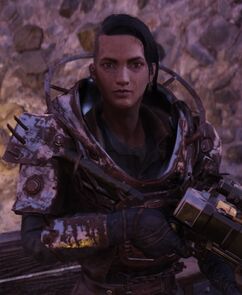 Kiyomi is a member of the raiders at the Crater in Appalachia in 2103.

One of the newest recruits in the raider group, Kiyomi was assigned to guard duty on the outskirts of the Crater, near the farming fields. She is bored and frustrated by this duty - because no one would dare assault the Crater, Kiyomi never sees anything interesting. She theorizes that Meg Groberg placed her on guard duty as a test of her wills.

Photo Opportunity: Instead of giving the commissioned photographs to Davenport, a Vault Dweller can instead give them to Kiyomi for a bonus to reputation with the raiders.

Kiyomi appears only in Fallout 76, introduced in the Wastelanders update.

Retrieved from "https://fallout.fandom.com/wiki/Kiyomi?oldid=3426133"
Community content is available under CC-BY-SA unless otherwise noted.