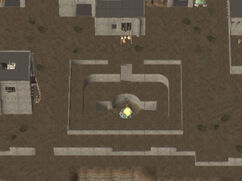 The Kiva, surrounded by several houses

The Kiva is a pit in Mesa Verde. In 2088, the Mesa Verde computer began to fail. The scientists feared that technology of the "Old World" would be lost forever, so the scientists began to paint and carve electronic schematics into the walls of the Kiva. It is now being used by the Ciphers to teach the children maths.

A ladder leads 20' down into this 40' wide covered pit (there is a hole in center of the cloth covering, though). The sides of the pit are painted and carved with mathematical formulas and electronic schematics explaining how to build a variety of electronic devices. Many of the paintings and carvings have faded due to age. The Nemonik and his assistants are found here most of the time, studying the schematics.

The Kiva was going to appear in Van Buren, the canceled Fallout 3 by Black Isle Studios.

Retrieved from "https://fallout.fandom.com/wiki/Kiva?oldid=2205825"
Community content is available under CC-BY-SA unless otherwise noted.