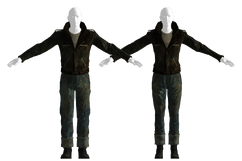 The Kings outfit is a piece of light armor in Fallout: New Vegas.

Worn by the Kings, it is a black leather jacket with the Kings logo on the back, a plain white t-shirt, black boots and light blue jeans.. It only provides a Damage Threshold of 1 and does not disguise the player character as a member of the Kings.

Outfits stored in the King's School of Impersonation