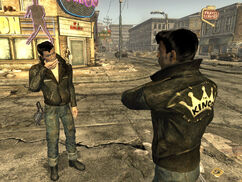 Kings gang members are a gang of Elvis impersonators living in Freeside in the Mojave Wasteland in 2281.

Originally tribals, like most factions seen in New Vegas, the soon to be Kings found an old building emblazoned in rock and roll. Inside they found holotapes, jackets, and a seemingly unlimited supply of hair gel to follow in the footsteps of one great leader. It was jested that the building may have been a site for cult worship of an icon known only as The King. Here to stay, the Kings claim this side of town as their own.

Retrieved from "https://fallout.fandom.com/wiki/Kings_gang_member?oldid=3266904"
Community content is available under CC-BY-SA unless otherwise noted.