While Mr. House was bringing civilization to the Vegas tribes during his takeover of Vegas, one such tribe on the outskirts of The Strip refused his offers of reform. In a building in Freeside, a young scavenger from the tribe had unearthed strange paraphernalia about people who worshiped an ancient, black-coiffed deity of considerable style and singing talent, known as "The King".

Since those earlier days, the Kings have grown to become the dominant force of Freeside, fiercely independent from New Californian Republic or House rule. However, with the strife in the rest of the Mojave, NCR squatters have began to move into the Kings' territory backed by the NCR, who the King sees as being a potential threat- "The devil in disguise".[1] 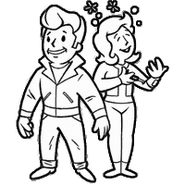 Retrieved from "https://fallout.fandom.com/wiki/Kings?oldid=2568846"
Community content is available under CC-BY-SA unless otherwise noted.