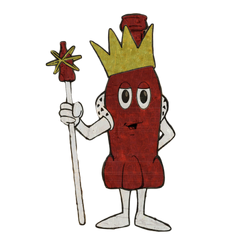 King Cola is the fictional ruler of Kiddie Kingdom in Nuka-World.

King Cola was created to function as one of the mascots for Nuka-World, with special focus on Kiddie Kingdom. He is in the same family as Cappy and Bottle.[1] In 2077, Leo Mendoza was selected to play him for the show at Kiddie Kingdom.

King Cola is only mentioned in the Fallout 4 add-on Nuka-World.

Retrieved from "https://fallout.fandom.com/wiki/King_Cola?oldid=2831699"
Community content is available under CC-BY-SA unless otherwise noted.