“Oh, I know it says "school" out front, but everything in here seems to be related to the worship of some guy from back in the day.”— The King

King's School of Impersonation is a building in Freeside, located southeast of the Atomic Wrangler Casino and northwest of Mick & Ralph's. The building serves as the home of the Kings and their leader, The King.

The business served as an Elvis Presley impersonation school before the Great War. Although Elvis' name has been lost to history, the school is still active in 2281, with the gang members persisting in their emulation of the original "king" while simultaneously ruling as the predominant power in Freeside.

The building is sizable and consists of three floors. All items in the building are considered owned and in taking them, Karma will be lost. Contrary to this, all beds can be used freely. The Courier will enter through a door on the northmost corner of the building into a reception area.

In the reception room, couches line the wall, empty whiskey bottles litter the floor, and Kings gang members mill about the room, sitting on barstools around a semicircle countertop. An inoperable coffee machine sits on the counter and a broken freezer behind contains empty Sunset Sarsaparilla bottles.

There are two directions to proceed from the reception area. To the left of the counter is the entrance to a theater of sorts, with a stage, spotlights, and seating. Pacer will stop the Courier upon approach, requiring payment of 50 or 500 caps to speak with The King. The Courier can offer 5 caps, which he will refuse unless a 60 Speech check is passed, or pay no caps by passing the initial 60 Speech check. No matter what amount is given to Pacer, if the Courier tells The King, he will reimburse the player character and have unique comments on each differing sum. Inside the stage room, a Kings gang member performs for The King, who sits in front of the stage joined by his cyberdog, Rex.

A locked door on the southside of the stage room can only be opened with The King's key, obtainable only by pickpocketing. The area behind the door is accessible immediately by following the hallways of the first floor, and therefore pickpocketing the key is unnecessary to explore the building in full.

The second way to proceed from the reception area is a door directly opposite the main entrance. It leads to the living areas of the building, of which there are three floors. Each floor contains bedrooms, recreation rooms, and storage areas. Rooms on the first floor include a storage closet full of wire music stands, and two bathrooms. There are three bedrooms containing nine total beds and two dressing rooms on the first floor. In one of the rooms, cups alongside three ping pong balls are set up as if to play beer pong. In one of the dressing rooms, Sergio can be found. He is the gang's hairstylist. If the Courier becomes a member of the gang, they can change their hairstyle here. The staircase to the second floor is located in the west corner.

The second floor has two bathrooms that are larger than those on the preceding floor. The lefthand bathroom has three stalls and two sinks, while the righthand stall has two stalls, two urinals, and one sink. All of the water in these bathrooms is radiation-free. In the righthand bathroom, a straight razor can be found on the edge of the sink with a pool of blood on the floor, presumably from a botched shaving attempt. A first aid box is mounted on the wall in each bathroom.

Apart from the bathrooms, this floor is comprised entirely of bedrooms. There are six bedrooms containing 21 beds on the second floor. The bedrooms have various personal effects within, including switchblades, cherry bombs, and alcohol bottles. One bedroom has a battery-powered light on the ground next to scrap metal, a hammer, and a wrench. Another bedroom has a chessboard propped up on cinderblocks. A bedroom in the north corner has a mattress lying on a desk, with a bottle of wine balanced on top. The Kings have turned another bedroom into a putting green, lining up squares of carpet underneath a cup on its side, with four golf balls and a 9 iron. The staircase to the third floor is located in the south corner of the building.

By proceeding in a clockwise fashion, the Courier will first find Pacer's bedroom, with a lit cigar on the end table next to a queen-sized bed. This bed will grant the Courier the Well Rested effect, as will the other beds on the third floor. The next room is a storage room filled with desks. To the right of the storage room is the bedroom of The King. A Kings member stands guard outside.

The bedroom is large, with windows extending to the top of the tall, coffered ceiling. Looking at the building from outside, the third-floor windows on the recessed walls above the main entrance belong to this room. The bedroom is occupied by two King groupies wearing sexy sleepwear. They cannot be engaged in dialogue but will say various things about The King or ask if the Courier is supposed to be there. The room has a unique heart-shaped bed, a pool table, jukebox, and a Sunset Sarsaparilla vending machine. The King can be found sitting in the chair next to the jukebox at times, next to Rex, behind a table with a Boxing Times skill magazine and harmonica. Connected to The King's bedroom is the bedroom belonging to the groupies, fitted with two queen-sized beds, a vanity, and a bathtub.

The last room on the third floor is filled with clothing items, including Kings outfits and Jailhouse Rockers. If the Courier joins the gang, they will be given an outfit of their own. There is a large chalkboard on the wall with faint writing. Upon closer inspection, the Courier can read a "King Impersonation Checklist" with instructions to "move hips," "say 'uh huh'," "say momma," and "peanut butter & banana sandwiches" as well as "This week's homework" including "(illegible) girls (illegible)," "gyrate," and "aint nothin but a hound dog" written across the bottom. Other chalkboards can be found throughout the building featuring similar scribbles, including "make $$$." The hallway leads back to the stairway in the south corner.

King's School of Impersonation appears only in Fallout: New Vegas.

The King's School of Impersonation is based on the real world location of Four Queens Hotel and Casino, located in the Fremont Street Experience in Las Vegas, Nevada. Many aspects of the casino bear resemblance to the in-game equivalent, including the building's structure, name, location, and design. 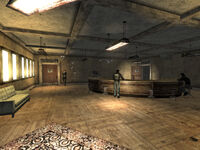 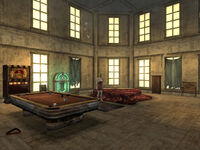 Prime bedroom, with one of the Kings' groupies 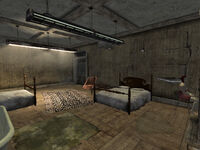 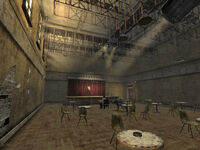