00000079
“Well that's a damn fine coincidence! That's what this store's here for! We got about everything you can need. Let me show you some things over here . . .”

Killian Darkwater is the mayor of Junktown in 2161.[1][Non-game 1] He runs his own general store called Darkwaters and acts as the head of the Junktown guard.[2][3][Non-game 1]

The grandson of the founder of Junktown and son of its previous mayor,[4][5][Non-game 1] Killian Darkwater spent time in his youth travelling with caravans but eventually settled down and opened "Darkwaters", a general store in Junktown.[6][2] Killian took on the role of mayor of Junktown following the death of his father,[5] which the public generally approves of citing him as a hard and strong man that acts fairly and will protect Junktown as best he can.[7][8][Non-game 1]

As a leader, Killian is hard on crime and shady practices with a focus on Gizmo and his casino,[9][10][Non-game 1] though he is not above making deals with local gangs to help keep the peace.[11] This attitude has earned him the ire and wrath of Gizmo, who believed his casino was the only reason Junktown was prosperous following Killian's rise to the position of mayor.[12]

Killian Darkwater appears in Fallout and is mentioned in Fallout Bible.

"Well that's a damn fine coincidence! That's what this store's here for! We got about everything you can need."

"Oh yeah, sure you do. And when you were a baby, your crib was a safe."
"Why don't you come back when your mama teaches you some manners." 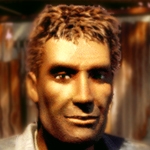 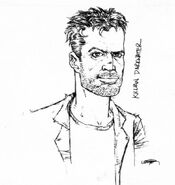