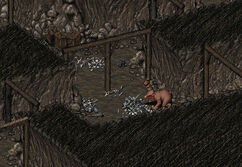 “People been disappearing. Just them that are slow and sickly, for now. 'Course, they don't stop to cook their food like us. They just gnaw it into a few bloody clumps of hair and rags. Least that's all we find in the morning. I've even heard talk that there's some kind of giant rat god that tells 'em all what to do.”— Slim Picket

Kill the rat god is a side quest in Fallout 2.

There is a big problem in Trapper Town, the west end of Klamath. Slim tells the Chosen One he thinks there is something in the caverns below controlling the rats that have been infesting the place.

The key to the warrens door can be obtained in one of several ways, including:

Once in the warrens, the Chosen One must battle their way down through the caves until they reach the second sub-floor. Below lies Keeng Ra'at the rat god, the brains behind the invasion. The giant rat has a considerable amount of HP, and will be challenging. If it gets a Critical Hit in the eyes, no matter the damage - it will always be fatal.

When the quest is completed and the Chosen One talks to Slim afterwards, he will state how they are a regular "Pied Piper". In accordance to the goal of this quest, the 'Pied Piper' is a mythical character said to have removed an infestation of rats from the town of Hamelin during the Middle Ages.

Retrieved from "https://fallout.fandom.com/wiki/Kill_the_rat_god?oldid=3341545"
Community content is available under CC-BY-SA unless otherwise noted.