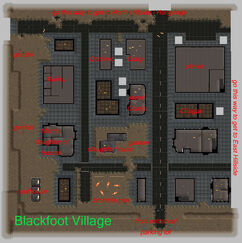 All of their loot

Kill the Blackfoots was going to be a quest in Van Buren, the canceled Fallout 3 by Black Isle Studios. It was located in Blackfoot Village.[1]

You've decided to wipe these slaving bastards off the face of the earth. Yipee!!

Retrieved from "https://fallout.fandom.com/wiki/Kill_the_Blackfoots?oldid=2248078"
Community content is available under CC-BY-SA unless otherwise noted.