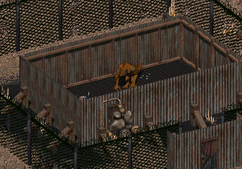 “Sounds like something BIG is moving around inside.”— In-game description

Kill the "chicken" is an unmarked quest in Fallout 2.

The "chicken" that Rose gets her wasteland omelettes from is actually a very fearsome deathclaw!

To reach it, one must first subdue the dogs, then blow up the rocks with explosives dynamite. The rocks can also be moved by hand, with a Strength above 7, which can be attempted repeatedly.

Killing the deathclaw gives 1000 XP, but also a drop in Modoc town reputation. Rose will also no longer sell the omelettes. Killing Rose's deathclaw while sneaking and without being detected will not drain reputation. Upon asking for an omelet, Rose will simply say that she no longer offers them because "some fool broke into our coop and killed our... chicken".

When blowing the rocks and the dynamite blows the dogs as well, the game will crash. [verified]

Retrieved from "https://fallout.fandom.com/wiki/Kill_the_%22chicken%22?oldid=2959442"
Community content is available under CC-BY-SA unless otherwise noted.