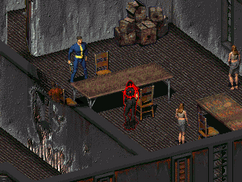 “[...]then you know how ruthless and bloodthirsty they can be. The Blades are the worst of them all, I'm afraid. We're a humble, god fearing town that is only trying to survive, and these... these... monsters... prey on us... [He whispers under his breath] and our children...”— Jon Zimmerman

Kill Razor is an unmarked quest in Fallout.

Razor is the leader of the Blades and is located north of Adytum. Upon killing Razor, the rest of the Blades will become hostile. Fortunately for the Vault Dweller, they are either unarmed or armed with weak melee weapons. Looting their corpses can provide a large number of stimpaks. In addition to that, virtually every Blade has a little stash of caps, making this a relatively lucrative and easy mission.

The Vault Dweller then should return to Jon Zimmerman to receive their reward.

Alternatively, when speaking to Razor, and selecting the dialogue options "Are you the leader of this gang?" and answer that Jon sent them to avenge his son, Jason Zimmerman, then asking who Razor's going to send to hell, she'll tell the Vault Dweller that the Blades did not kill his son, it was the Regulators who murdered him and framed the Blades. Razor then offers a recording of Regulator transmission as proof. The Vault Dweller can then offer to inform Zimmerman about it, and receive the holodisk from Razor. If the Vault Dweller shows it to Zimmerman, he will try to kill all of the Regulators, though fail miserably due to lacking equipment and self-defense.

Retrieved from "https://fallout.fandom.com/wiki/Kill_Razor?oldid=2878307"
Community content is available under CC-BY-SA unless otherwise noted.