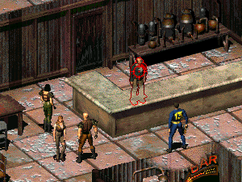 “Neal owns the bar. He's a good guy, always treated me right. We used to date, but he got a little too serious for my liking. I don't want to be a widow.”— Trish

Kill Neal is an unmarked quest in Fallout.

Once the Vault Dweller has given Neal's urn to Vinnie, he will ask them for help with killing Neal. If accepted, the Vault Dweller will be transported to the Skum Pitt; once Neal and Trish (see note) are dead.

Retrieved from "https://fallout.fandom.com/wiki/Kill_Neal?oldid=3345591"
Community content is available under CC-BY-SA unless otherwise noted.