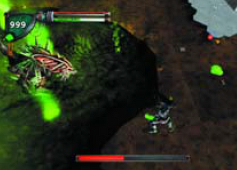 “The mama deathclaw gobbled up the chief scientist... and the lab key. You can ask her very nicely to shit out the key, or cut her open and pull it from her belly.”

Kill Deathclaw Mother is a quest in Fallout: Brotherhood of Steel. It is located in the Secret Vault ruins cave.

After making their way through the first three ruins sections, the Initiate will find Dubois, the Vault scientist holding the laboratory keycard, in the caves. He wants to get out of there as soon as possible, as the mother deathclaw once contained in the facility is now on the loose. Unfortunately, it's already too late; the Initiate is knocked unconsious while Dubois is ripped apart and eaten by the mother deathclaw. That means the keycard is also in her belly. Kill her to get it. She's practically blind, mostly only reacting to loud noises and running, although her sense of smell will guide her more and more the closer the Initiate gets. She is also able to regenerate in the radioactive pools if she's hurt.

Once she's dead, get the key and return to Ruins Two, where a previously locked door now can be opened.

Retrieved from "https://fallout.fandom.com/wiki/Kill_Deathclaw_Mother?oldid=3260162"
Community content is available under CC-BY-SA unless otherwise noted.