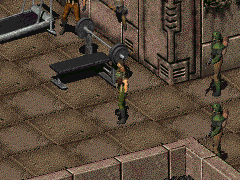 “Look, someone has to take care of Darion and his cronies. It should be done now before they realize what has happened and have time to prepare for an attack. Why not get this over with and take Darion out now?”— Zeke

Kill Darion is a side quest in Fallout 2, that requires you to infiltrate the New Khans occupied Vault 15, and kill their leader Darion in order to break their hold on the Vault.

In order to start the quest you must have completed the Rescue Chrissy quest. After this is done, go to Zeke, the leader of the squatters, who will give you this quest and the red keycard that gives access the elevator to Vault 15.

If you did not kill Phil when rescuing Chrissy, he will be waiting outside the elevator, where he will initiate dialogue and attack. After he is dealt with, you can enter Vault 15 via the elevator.

In order to get to Darion, you will need to pass a few Khan guards. You can kill them or bypass them peacefully with a Speech check. Darion himself is located on the 3rd level of the Vault near the big computer. Upon seeing the Chosen One, Darion will initiate a short bit of dialogue, after which he will alert his bodyguards and guard dog, equip a flamer, and attack you. You only have to kill Darion in the fight that ensues, but his backup can be hard to avoid.

After killing Darion, go to the first floor of the vault. The present Khans are now alerted to your presence, and will attack on sight, and can be hard to sneak past.

Head for the nearest exit of the vault, and return to Zeke.

You will be rewarded with 6000 XP, and will then be able to complete a deal with the NCR.

Retrieved from "https://fallout.fandom.com/wiki/Kill_Darion?oldid=3437570"
Community content is available under CC-BY-SA unless otherwise noted.