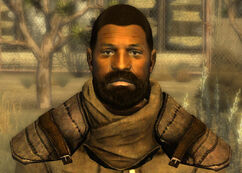 “What? There's no way... we're miles from the Colorado. They...they aren't even waiting for the Dam to fall. They're already inside the borders...”— Sgt. Kilborn on the Legion

Sergeant Kilborn is a New California Republic non-commissioned officer stationed at the Mojave Outpost in 2281.

Kilborn has seen his fair share of war and politics, enough to give him a rather cynical perspective on life. Being stationed at the Mojave Outpost, the gateway into the Mojave, and watching the endless stretch of desert did little to improve his spirits.[1] The sheer boredom of watching the road for critters trying to make their way into the camp doesn't help either, especially in the wake of the lockdown following the NCRCF prison break.[2][3][4]

Retrieved from "https://fallout.fandom.com/wiki/Kilborn?oldid=3177005"
Community content is available under CC-BY-SA unless otherwise noted.