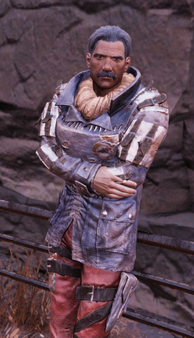 Kieran Kennedy is an employee of the Blue Ridge Caravan Company at Big Bend Tunnel in 2103.

Kieran is a head of Operations of the caravan leading brahmin through Big Bend Tunnel during the event Riding Shotgun. He mentions to Eugenie that he has attempted to find a different line of work many times, but it has never worked out. Kieran has children[1] and is from a homestead at an unknown location outside of Appalachia where some of his extended family still lives.[2] He is an "old associate" of Vinny Costa, however the specific association is currently unknown.

Kieran appears only in Fallout 76, introduced in the Wastelanders update.

Retrieved from "https://fallout.fandom.com/wiki/Kieran_Kennedy?oldid=3468184"
Community content is available under CC-BY-SA unless otherwise noted.