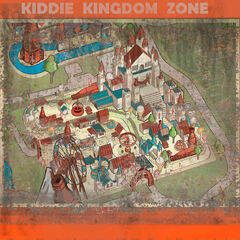 “Whether you're a kid-in-fact or a child-of-heart, Kiddie Kingdom has endless whimsical fun for you.”— Promotional quote

The park featured many different theatrical performances and stage shows and the employees got along well. Before the war a number of employees decided to make plans "in case things went south". When the bombs fell many made their way to the tunnels under the park along with the few guests they could convince to follow them to safety. They survived the realities of the post-War world and slowly began to notice changes happening to their bodies due to radiological exposure. Slowly they began to become creatures known elsewhere as ghouls.

They realized the spray installation throughout the park could be used to their advantage, as radiation no longer directly hurt them, but it would repel attacking raiders by spraying irradiated water. Despite raider attacks and wasteland life, most survived for well over two hundred years.

However, unlike sentient ghouls elsewhere, many went feral and became violent to outsiders. It was decided that for their own protection those that had turned feral should be locked away. Eventually a raider attack forced those that were left to retreat to the center of the park. This led to many ferals escaping and attacking the raiders. One of the residents, Rachel Watkins, decided that a cure had to be found and set off to find it, leaving Oswald the Outrageous in charge.

Before completing the quest A Magical Kingdom many green mist sprayers are spread throughout the park. The player may encounter many feral ghouls as well.

Kiddie Kingdom only appears in the Fallout 4 add-on Nuka-World.

Add an image to this gallery
Retrieved from "https://fallout.fandom.com/wiki/Kiddie_Kingdom?oldid=2852801"
Community content is available under CC-BY-SA unless otherwise noted.