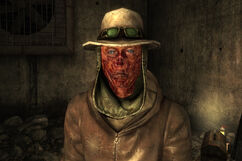 Kidd is a ghoul encountered in the Old Olney underground in 2277.

Kidd is part of a group of like-minded ghouls that decided to forge ahead into unexplored territories under the leadership of Sanders and set up a new ghoul settlement to rival Underworld. Kidd and Wint are leaving this area at speed, as their camp has been compromised by deathclaws they had tragically overlooked the whereabouts of.[1]

Kidd appears only in the Fallout 3 add-on Broken Steel.

His name is a reference to Mr. Kidd, a character in Sir Ian Fleming's novel and similarly titled James Bond film, "Diamonds Are Forever" who is partners with a man named Mr. Wint.

Retrieved from "https://fallout.fandom.com/wiki/Kidd?oldid=3443254"
Community content is available under CC-BY-SA unless otherwise noted.