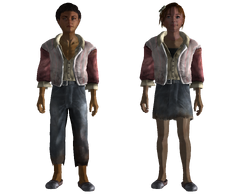 Kid's outfits are diverse pieces of clothing in Fallout 3, worn by the various children in the Capital Wasteland.

Wearing kid's outfits will change the player character's body into that of a child, lacking defining adult features though remaining the same scale.

The outfits can be obtained by reverse-pickpocketing the wearers with better armor. The Pip-Boy 3000 icons for these outfits are that of a Vault 101 jumpsuit.

The Athlete of the Wastes outfit features a white buttoned shirt with a pink and white two-tone jacket worn over it, accompanied with worn gray shoes and either belted gray trousers or a belted gray skirt and black undershirt depending on the character's gender. It is worn by Maggie, Flower, Biwwy, Squirrel, Joseph, and James Hargrave. It is also worn by Sally, who appears in Mothership Zeta.

The pre-War kid's outfit features a red baseball cap, black & white striped crew-cut t-shirt, belted denim jeans with a patch sewn to the left leg, and brown athletic shoes in the male design, and features a pink & black sundress with white socks and black bar shoes in the female design. The clean version of the female design is worn by Betty in Tranquility Lane, whereas the dirty versions are worn by Jenny Wilson, Princess, Junior Smith and Derek Pacion.

The ragamuffin outfit features ripped grey dungarees with scrap metal over the left kneecap worn over a torn white vest, accompanied with two blue gloves and sandals made of scrap materials. The Dungarees have one strap in the male design, or two straps in the female design. It is worn by Bryan Wilks, Sapling Yew and Penny.

The Wasteland scout uniform features a blue neckerchief tied with a white band, worn over a sleeveless beige cargo shirt and belted beige cargo shorts along with a ripped pair of green woollen socks and athletic shoes in the male design, and features a beige sash adorned with badges worn over a belted green shirt-waist dress with a red bow on the collar and athletic shoes in the female design. It is worn by C.J. Young, Lucy, Sammy, Rachael, and Knick Knack. It is also worn by Kenny, who appears in Point Lookout.

The pre-War outfit and watch is what you wear in Tranquility Lane. It features a white crew-cut t-shirt with black accents, accompanied with belted blue jeans and red athletic shoes. The watch is a traditional analogue watch with a blue strap and brassy metallic accents. It is only available through console commands, and the colors are only visible in greyscale without console commands, due to the visual effects of Tranquility Lane. Timmy Neusbaum also wears this outfit, though without the watch.

Only the kid's baseball cap and the kid's Murray the Mole hat are obtainable via reverse-pickpocketing. The kid's police hat and ragamuffin tophat are only obtainable via console commands on the PC.

Kid's ballcap with glasses can only be found in the game files. It features a two-tone white and red baseball cap with black-framed eyeglasses.

While many children wear the ragamuffin outfit, only Eclair and Kenny possess the matching ragamuffin tophat. It features a plain black tophat adorned with maroon-rimmed goggles. 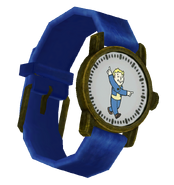 Watch replacing the Pip-Boy 3000 in the Tranquility Lane simulation
Русский
Community content is available under CC-BY-SA unless otherwise noted.
Advertisement