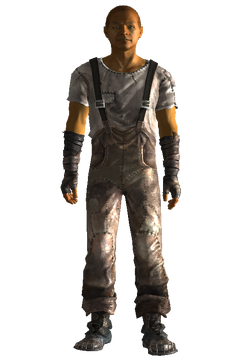 Kevin Hargrove is a destitute-looking man that was to be located in Freeside. He would have offered the player character the opportunity to purchase a brahmin named Betsy.

Kevin Hargrove was added during the development stages of Fallout: New Vegas, but was cut from the final retail release of the game.

Retrieved from "https://fallout.fandom.com/wiki/Kevin_Hargrove?oldid=3242479"
Community content is available under CC-BY-SA unless otherwise noted.