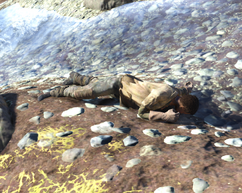 Kesha McDermott is a deceased Responders researcher whose corpse can be found in Flatwoods in Appalachia in 2102.

On the day the Great War began, Kesha was coordinating a statewide high school science fair in Watoga with the theme "The Future of Energy!". After the bombs had fallen, she managed to get out of the city safely, and found herself scavenging for food and fighting off rabid survivors in an attempt to stay alive. She found some surviving high schoolers whose parents had died and they holed up in an old house to avoid the chaos and violence that followed in the wake of the War.

In that house, she managed to repair a radio by soldering its circuitry and heard a broadcast from the Responders. The broadcast spurred Kesha and the students to set out for Flatwoods in hope of joining up wth them. The trip was difficult and, although they were attacked by raiders who stole their supplies, they survived and what they found in Flatwoods was like a dream come true.[1]

Kesha volunteered for the Responders and lived at 3 Church Road.[2] Specializing in hydrology and education, she created a testing kit for monitoring water contamination and also taught classes on how to make water pure and safe to drink.

Her last check-in was on October 25, 2096, a day when she was monitoring water safety protocols and conducting hydrology experiments at the Flatwoods River.[2] This is the same place where she would die and her body can be found in 2102.

Kesha McDermott appears only in Fallout 76.

Retrieved from "https://fallout.fandom.com/wiki/Kesha_McDermott?oldid=3173263"
Community content is available under CC-BY-SA unless otherwise noted.