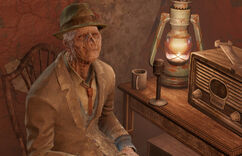 “Change is coming to Goodneighbor!”

Kent Connolly is a ghoulified radio technician, operating out of his studio in the Memory Den in Goodneighbor, in 2287. He is responsible for the maintenance and operation of the Silver Shroud Radio signal, the pride and joy of his childhood.

Connolly was a die-hard fan of both the Silver Shroud and Mistress of Mystery series, having listened to every single one of its 420 episodes (holiday special included) of the Silver Shroud and having an encyclopedic knowledge of every detail.[1] His knowledge was even tapped by Frederick Rivers for building and recreating the Order of Mysteries underground lair. For nearly a year, Connolly was advising Frederick Rivers on details from the comics and possible design solutions for the devices used by the Mistress of Mystery. This was all unbeknown to Kent as Frederick kept the advising through email correspondence only, giving him the basis for such ideas as utilizing multilayered asbestos liner in the new version of the Veil of Secrets, ballistic weave, the Phantom Device using gas canisters and giving his own critiques, such as the precision of the Hall of Trials, as well as complaining about the use of the new shortened Garb of Mysteries, going as far as to plan to start a letter-writing campaign to Hubris Comics to get their attention.[2][3]

Connolly's life in the wasteland was a traumatizing time for him that still very painful for him to think about and would be the cause of the pain that he resolves the only way he knows how: to relive the memories from before the Great War.[4] Connolly just keeps to himself, reliving his beloved radio serial over and over again in a quiet corner in the Memory Den keeping the pods operational in exchange for time on the memory loungers.[5][6] Several recordings of various episodes of the Silver Shroud crime-drama that had survived the atomic fire of the Great War. During his off time, from his one-room studio in Goodneighbor, Connolly works tirelessly every day to return the radio show of his hero and role model back to the airwaves for the entire Commonwealth to hear. However, deep in his heart, he desires to bring justice and peace to Goodneighbor (and by extension the Commonwealth) by bringing about the return of the Silver Shroud. However, while he has made the Shroud's signature silver machine gun,[7] the old, rickety ghoul could not just go around shooting people or he would be just another hooligan.[8] He also has neither the costume, the condition nor the aptitude to take up the mantle of the Silver Shroud, though the Sole Survivor can take up this role instead.[9]

Kent Connolly's only friend in Goodneighbor is Irma. Having known Connolly long enough to be old friends, Irma is supportive of his Silver Shroud obsession and allows him extra time on the memory loungers when she can. However, to take the Silver Shroud from radio to real-life was too much for Irma who insisted he not pursue it in fear of him getting hurt.[10]

Retrieved from "https://fallout.fandom.com/wiki/Kent_Connolly?oldid=3454867"
Community content is available under CC-BY-SA unless otherwise noted.
... more about "Kent Connolly"
RDF feed
Has platform
PC +, Playstation 4 +  and Xbox One +