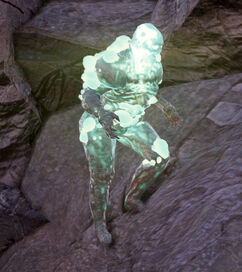 Agent Kensington is a glowing one in Appalachia in 2103.

Agent Kensington was a member of an unknown spy agency stationed at Listening Station 4D-20, which was secretly located in the basement of the farmhouse at Solomon's pond. Kensington worked with Sawyer Lang and Enrique Gómez and had a security level of 5, which allowed access to the holotape repair terminal located inside the basement.[1] At some point either during or after the Great War, Kensington became a glowing feral ghoul, though remained at the listening station.

Kensington appears only in Fallout 76, introduced in the Wastelanders update.

Agent Kensington is likely a reference to a character in the Austin Powers film series of the same name.

Retrieved from "https://fallout.fandom.com/wiki/Kensington?oldid=3360564"
Community content is available under CC-BY-SA unless otherwise noted.