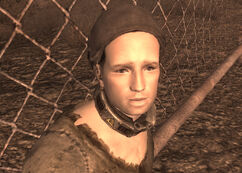 Cottonwood Cove
Freeside (after completion of Left My Heart)

“We're being held here against our will! I beg you, help us!”

Kenny Weathers is slave living in Cottonwood Cove in 2281.

Kenny, his mother and his sister were captured by Caesar's Legion when attempting to relocate in the Mojave Wasteland.

His father, Frank Weathers, fled during their capture.

Retrieved from "https://fallout.fandom.com/wiki/Kenny_Weathers?oldid=3141299"
Community content is available under CC-BY-SA unless otherwise noted.