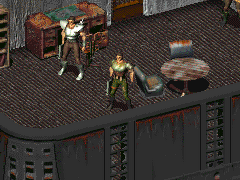 “I only take care of his duties when the Sheriff is unavailable.”

Deputy Kenny is found in the Hub's police station with Sheriff Greene. He advises that the Vault Dweller should talk to the sheriff, and he should be spoken to only if the sheriff is unavailable.

Kenny and the sheriff appear to be on very good terms, as Kenny claims the sheriff is 'like a father' to him.

Kenny appears only in Fallout.

The message box will display "Oh my God! They killed Kenny! Those bastards!" if Kenny dies. This is a reference to the running joke of South Park where Kenny dies in nearly every episode. Following his death, Kyle and Stan scream a nearly identical phrase every time.

Retrieved from "https://fallout.fandom.com/wiki/Kenny_(Fallout)?oldid=3500797"
Community content is available under CC-BY-SA unless otherwise noted.