Point Lookout
“This seems like a good hideout. I could use a place to crash and stash my gear.”— The Lone Wanderer

Kenny's cave is a location in Point Lookout in 2277.

To reach Kenny's cave the first time, one might go through Herzog Mine as it leads to Miner's Rest, where Kenny resides. The surface entrance might prove much harder to find.

Kenny may be grudgingly encouraged to allow the Lone Wanderer to share his hideout. This requires passing a Speech check, using Child at Heart or the retrieval of Kenny's bear which can be found in the nearby mirelurk and swamplurk infested "Blackdamp Shaft."

Once Kenny gives his approval:

Kenny's cave appears only in the Fallout 3 add-on Point Lookout.

A tribal will sometimes appear if you enter Kenny's cave from the Herzog Mine entrance. She will greet you like any other tribal, and walk towards the ladder leading out. [verified] 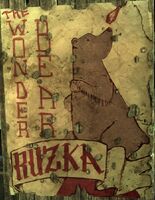