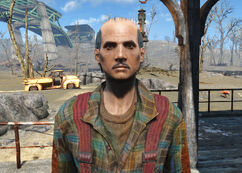 Close to Home
Far From Home

“We got out, that's all that mattered. And now you can return the favor by finding my daughter...”

Kenji Nakano is a fisherman living in the Nakano residence on the northeastern shore of the Commonwealth in 2287.

Kenji is the husband of Rei Nakano, father of Kasumi Nakano, and a small time fisherman from the northeastern coast of the Commonwealth. He previously lived with his father, Taichi Nakano, as well. Kenji is also an experienced sailor, having taken his boat across the East Coast, including north "to where the waters start to freeze."[1] Although they are a relatively independent family, Kenji occasionally takes trips to Diamond City for supplies.[2] Years prior to 2287, he helped Nick Valentine out on an investigation, as the detective needed access to a boat while searching for a lost heirloom. However, once the client had what he was looking for, he double-crossed Nick and Kenji, shooting the latter in the hip. The two managed to escape, though Kenji still has the lead from the bullet lodged inside of him.[3] The events took place before Ellie Perkins began working for Nick, meaning that the records on the case are somewhat sparse.[4]

Extremely protective of his daughter, Kenji is stern but still loving.[2] After Taichi died at the hands of raiders,[5] Kenji became even more concerned with Kasumi's safety.[6] Because of this, when Kasumi leaves for Acadia without a trace, his anxieties are worsened, believing that she was taken by kidnappers. However, Rei disagrees and wants him to calm down, believing that she may have just left home, as she is nineteen years old, old enough to handle herself.[7] He contacts Ellie Perkins, Nick's assistant at the agency, to hire Nick to help find his missing daughter.[4] In desperation and panic, he has been trying to contact the people who he thinks kidnapped Kasumi over the radio, having talked into it for hours without sleep when Nick Valentine and his partner, the Sole Survivor, enter their home unannounced.[8]

Depending on how the Conflict on the Island is resolved, the Nakanos' missing person investigation may conclude in several different ways: Kasumi is dead, at which Kenji will express great remorse;[9] or Kasumi decides to stay in Acadia, and the Nakanos can be told that she is or isn't a synth. If they are told she was replaced, Kenji will be filled with despair, not knowing when his real daughter died.[10] If they are told she is human, but staying in Acadia because of the people she cares about there, Kenji will accept that Rei was right; that Kasumi had grown up and should be allowed to make her own life away from her parents.[11]

If Kasumi returns home safely, Kenji's reaction will differ depending on whether or not she believes that she is a synth. If Kasumi believes that she is a synth, Kenji will be angered, refusing to accept anything but his human daughter. The Sole Survivor can convince Kenji to accept Kasumi in spite of this;[12] otherwise, he will kick her out of the house.[13] If Kasumi realizes that she was human after all, Kenji will be tearfully relieved to have her home and expresses his extreme gratitude.[14] He will also offer some of Taichi's old, buried belongings as a reward.

Kenji Nakano appears only in the Fallout 4 add-on Far Harbor.

Retrieved from "https://fallout.fandom.com/wiki/Kenji_Nakano?oldid=3292837"
Community content is available under CC-BY-SA unless otherwise noted.