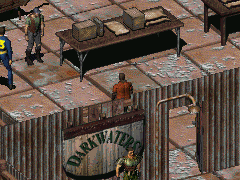 Kenji is an assassin sent by Gizmo to kill Killian Darkwater in 2161.

Based on his appearance, it can be assumed Kenji might have been a poor Junktown peasant that needed work before being hired by Gizmo to kill Killian Darkwater. Kenji is only known for his failed assassination; he was killed by either the Vault Dweller or one of Killian's guards thereafter.

He has a special script - once the Vault Dweller finishes talking to Killian, he'll spawn and attack Killian.

Kenji appears only in Fallout.

Retrieved from "https://fallout.fandom.com/wiki/Kenji?oldid=3461526"
Community content is available under CC-BY-SA unless otherwise noted.