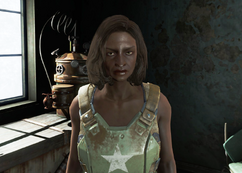 Kendra is a gun for hire working for Sinjin, living in the Water Street apartments in the Financial District, just south of Goodneighbor.

Kendra is an assassin working for Sinjin's gang. As part of his quest to wipe out the gang's activity in Goodneighbor, Kent Connolly instructs the Sole Survivor to find Kendra and take her out. The Sole Survivor, dressed as the Silver Shroud, tracks Kendra to her hideout at the Water Street apartments, fights past her bodyguards and confronts her in her room. Kendra dismisses the player as a loony, tells them that they're "in way over their head" and attacks them, though she ultimately ends up getting killed.

At the time of her death, Kendra had just received instructions from Sinjin to assassinate a scavenger named Shelly Tiller. If the Sole Survivor chooses to do so, they can complete the assassination and get paid for it via a dead drop.

Kendra appears only in Fallout 4.

Retrieved from "https://fallout.fandom.com/wiki/Kendra?oldid=3258738"
Community content is available under CC-BY-SA unless otherwise noted.