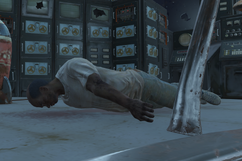 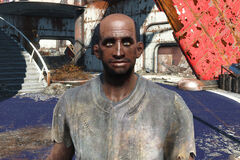 Kendell Alston is a deceased wastelander in Nuka-World's Starport Nuka in 2287.

Kendell Alston is the father of Tiana Alston. He was a settler in Nuka-World prior to the arrival of Colter and his gangs, and would make salvage runs into Starport Nuka with his daughter and other settlers. Due to the arrival of the Nuka-World raiders in the park, he tried to activate Star Control as a line of defense, but he did so before enough star cores had been gathered to properly control the systems. This resulted in his death and the death of his daughter and crew as the attraction's robots became hostile to them.

Kendell Alston appears only in the Fallout 4 add-on Nuka-World.

Retrieved from "https://fallout.fandom.com/wiki/Kendell_Alston?oldid=3109024"
Community content is available under CC-BY-SA unless otherwise noted.