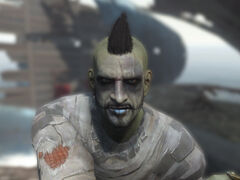 Ken Standish is a deceased wastelander whose corpse can be encountered at Jamaica Plain in 2287.

A scout specializing in locks, traps, and stealth, married to Tanya Standish. Ken was part of Sal's crew that tried to take the treasure of Jamaica Plain after Carl Everett spun a tall tale to get himself out of debt to Sal. The group scattered when they first encountered feral ghouls when they entered the city, Ken and his wife were cornered in a ruined home to the northwest and committed suicide rather than be torn apart.[1]

He is mentioned in the scavenger's list as someone who could pick the lock to the storeroom in Hubris Comics.

Ken Standish appears only in Fallout 4.

Retrieved from "https://fallout.fandom.com/wiki/Ken_Standish?oldid=3174064"
Community content is available under CC-BY-SA unless otherwise noted.