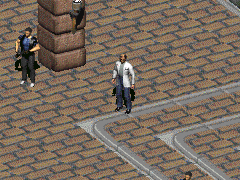 “I bring forth the wisdom of the Emperor.”

Ken Lee appears much like any other bureaucrat: Short, stocky, and wearing glasses. The only element that does not fit is the half-smile, which is more than most bureaucrats can manage (and his travels to New Reno).[2] His official position in the Shi is that of adviser to their leader, the Shi Emperor. From his position in the Steel Palace, Ken Lee brings the wisdom of the Emperor to his subjects, acting as a screen for their ruler, permanently hidden from prying eyes.[3][4]

The reason for this is simple: The Emperor is not a human being. He, or rather, it, is a supercomputer salvaged from the Shi-Huang-Ti, the submarine that brought the Shi to San Francisco in the first place. Ken Lee consults the computer and makes decisions based on its predictions. His style of rule is therefore calm and rational. Even when it comes to the most hated enemy of the Shi, the Hubologists, he is calm and to the point. He is also fully aware of the existence of the Enclave and Navarro, as well as the technologies at their disposal, but not the extent of their plans.[5]

Ken Lee appears only in Fallout 2.

Retrieved from "https://fallout.fandom.com/wiki/Ken_Lee?oldid=3344642"
Community content is available under CC-BY-SA unless otherwise noted.