Commonwealthy
“As the captain of this vessel, I won't allow anyone to jeopardize our mission no matter how valuable they think they are.”— Kells emphasizing the importance of the Brotherhood's mission.

Lancer-Captain Kells, registration KS-390LC,[1] is the captain of the Brotherhood of Steel airship, the Prydwen, in 2287. He is second-in-command of the Brotherhood's operations in the Commonwealth, reporting directly to Elder Maxson.

As captain of the Prydwen, Kells is responsible for keeping the airship flying and maintains order and discipline among the crew. He joined the Brotherhood when he was a child, as a squire,[2] rising up the ranks until he became a captain. He is also responsible for overseeing the training of members, particularly the squires, ensuring they get the education and training they need, as well as the chance to experience combat up close. 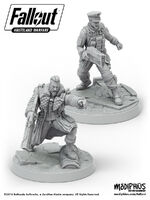