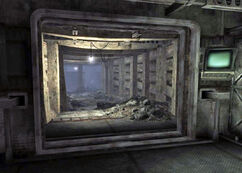 The bunker in the National Guard depot

Finding one of the Keller holotapes

“Have a happy holocaust!”— Ralph from tape 5

Keller Family Refuge refers to an unmarked quest in Fallout 3.

It consists of collecting five holotapes located around the Capital Wasteland to gain entry into the National Guard depot armory bunker. However, one only needs to collect four out of the five transcripts to gain entry into the National Guard armory bunker (or use a glitch without having any of the holotapes, see the related article for details). The tape that is not needed is Tape 1, which is found in the pylon shack. The switch to open the bunker doors is located on the top level of the depot. You will need to travel through the entire building and access the top level from the offices.

Travel to the VAPL-58 power station, directly southwest of Arefu, then head north following the electric towers until you reach the pylon shack (it's more like a fenced-in area at the last electric tower), where you will find the tape on the bottom shelf of the bookcase.

This tape is not needed to enter the bunker as it does not have one of the 4-digit code numbers. It simply provides the backstory for this quest.

There is also a mini nuke and pre-War book at this location.

Travel to Hallowed Moors Cemetery north of Big Town. Go in the front entrance of the church, and the second of five Keller family transcripts will be on the left on top of a lectern.

There is a captive inside, and a mini nuke on the table inside a wooden crate. There is also a Big Book of Science in the podium as well as a D.C. Journal of Internal Medicine on the shelves on the left before the captive.

These will be guarded by super mutants, possibly including brutes and a super mutant overlord depending on player level.

Travel to the Grisly diner and head inside, then go to your right and out the back. The third Keller tape is located on a desk at the back (outside).

The Grisly diner is just over a square north of the Temple of the Union or two squares east and slightly south of Greener Pastures Disposal Site.

There is a trap that swings from the ceiling activated by a pressure plate on the floor. There are raiders either in the diner or close by. There are also mines around the front and rear of the diner.

Travel to Rockbreaker's Last Gas, on top of a high cliff to the west, you will see the sniper shack, it's the location of the fourth of five Keller family transcripts. Make your way around the cliff on the southwest side of the cliff (there may be some super mutants/centaurs along the way). Inside the shack, the tape will be on the workbench on the left.

Travel to Anchorage Memorial and head north-northwest. Across the river, there is a semi-truck and a tent behind it. Inside the tent on the table is the fifth Keller tape, along with a wasteland captive.

There can be any type of super mutant (depending on the player's current level) and two centaurs there. A super mutant overlord only appears if you have the Broken Steel DLC.

Access to National Guard depot bunker with a significant amount of notable loot such as:

The sole remaining member of the Keller family, Mr. Keller, will be found past the sealed doors as a glowing one.

Sometimes holotape #3 or #4 will not appear on the desk, and the quest will become impossible to complete. [verified]

Retrieved from "https://fallout.fandom.com/wiki/Keller_Family_Refuge?oldid=3450252"
Community content is available under CC-BY-SA unless otherwise noted.