MisterKellerGlowingOne
“Ralphie, son, this is your father! We can't get into the goddamn Vault without you! Get your ass over here now! My "4" is useless without you, boy...”— Keller, on the audiotape

Mr. Keller is the head of the Keller family, which took refuge in the locked armory bunker of the National Guard depot.

Similar to the other members of the Keller family, he holds one of the numbers of a password that allowed entrance to the shelter. His daughter mentions in her diary that he frequently left the safety of the bunker. He appears as a glowing one upon the Lone Wanderer's arrival.

Mr. Keller appears only in Fallout 3. 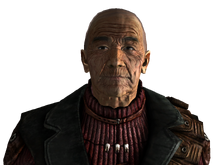 Keller as he appears in the GECK editor as "KellerFamilyHoloVoiceNPC4"
Español Русский
Community content is available under CC-BY-SA unless otherwise noted.
Advertisement