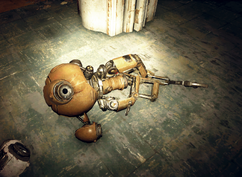 Kelemen is a deactivated Mister Handy at Vault-Tec University in Appalachia in 2103.

A Mister Handy playing the role of apprentice to Head Engineer Brass, Kelemen rushed in to fix the reactor to prevent radiation from overrunning the vault. Worried about contamination, Doctor Loris sealed the reactor wing with him inside, dooming Kelemen to death. This would become the bone of contention between Loris and her well-trained medical staff and the engineers. For his part, Kelemen and Estella sacrificed their lives to save the vault.

Kelemen appears only in Fallout 76, introduced in the Wastelanders update.

Retrieved from "https://fallout.fandom.com/wiki/Kelemen?oldid=3282303"
Community content is available under CC-BY-SA unless otherwise noted.