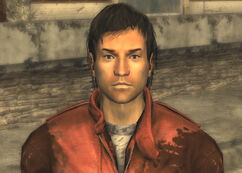 “Why don't you go cry to your wife, then - oh that's right! She left your worthless stinking ass!”

Keith is a chem dealer and Caravan hustler living in suite 200 of Aerotech Office Park in 2281.

Ever since being freed from slavery in Caesar's Legion, Keith has made his home in the Aerotech Office Park, where he has developed a dubious reputation. For one, he "makes his own luck" with some marked cards and hustles peoples at Caravan, especially when a "fat score rolls into town." On top of that, he keeps a stash of Jet around "for emergencies" and makes a killing selling it to junkies around the office park. Looking out only for himself, Keith is naturally a coward and is liable to do something desperate if confronted.

Captain Parker definitely suspects that Keith is selling chems and conning people, but he can't prove anything without some concrete evidence, and has no time to investigate Keith himself, especially when he has a refugee camp to oversee. It does not help that Keith likes to get the captain worked up, and is a general nuisance overall.

Retrieved from "https://fallout.fandom.com/wiki/Keith_(Fallout:_New_Vegas)?oldid=3168233"
Community content is available under CC-BY-SA unless otherwise noted.