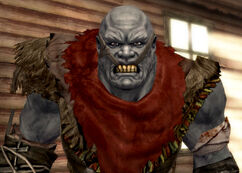 “Another human? One was enough.”— Keene

Keene is a nightkin inhabitant of Jacobstown in 2281.

Keene is an influential nightkin in Jacobstown who has a pull on other nightkin, attracting others to the town and keeping the ones already there from leaving. Marcus claims that Keene is smart, charismatic, and saner than most other nightkin, but also very impatient. Speaking with him will reveal his impatient and highly irritable nature. Eventually, his impatience towards Doctor Henry's cure for nightkin schizophrenia causes him to attempt to take the Stealth Boy Mk. II by force so that the nightkin can see how it works and upgrade all Stealth Boys they find as they roam the Mojave.

Keene actively shows displeasure when speaking with the Courier due to the fact that he hates being visible, as most nightkin do.

Retrieved from "https://fallout.fandom.com/wiki/Keene?oldid=3295871"
Community content is available under CC-BY-SA unless otherwise noted.