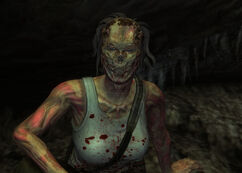 Office of Science and Industry

“It's sad, really. All those wonderful minds, undone by their own irresponsibility.”— Keely on the Vault 22 dwellers.

Keely is a ghoul trapped in Vault 22 in 2281. She is a researcher for the New California Republic's Office of Science and Industry.

A talented and well-versed scientist, Keely is a first generation ghoul from the beginning of the Great War.[1] Over the centuries of her life, she amassed a great deal of knowledge in many fields. She is essentially a freelance scientist, but not without a conscience. Her collaboration with the Republic's OSI is quite bumpy, as she often clashes with Thomas Hildern, director of OSI East, whom she considers a liability and hindrance to actual scientific discovery and has made a point of embarrassing him in front of important people whenever possible.[2]

Her work in Vault 22 was concentrated on researching the unique plants that grew there and the research efforts undertaken in the vault. She was knocked unconscious by the mantises that inhabit Vault 22 and trapped in their nest.

Although she aims to destroy the entire colony of plants and spores that caused the downfall of the vault, Keely cataloged any successful experiments conducted there, to preserve the knowledge that could become a benefit, rather than a hazard to the people of the wasteland.[3]

Retrieved from "https://fallout.fandom.com/wiki/Keely?oldid=3357023"
Community content is available under CC-BY-SA unless otherwise noted.
... more about "Keely"
RDF feed
Has platform
PC +, Playstation 3 +  and Xbox 360 +