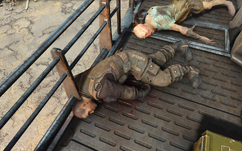 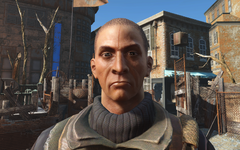 Knight Keane is a dead Brotherhood of Steel soldier at the Cambridge Police Station in 2287.

Keane was one of seven Brotherhood soldiers sent to the Commonwealth as part of Recon Squad Gladius. Upon arriving, the squad was immediately assaulted by raiders. While Keane survived, his suit of power armor was damaged and had to be abandoned.

Following the fortification of Cambridge police station and two unsuccessful assaults by the recon squad on local areas, Keane took part in the defense of the police station against feral ghouls and died during the fighting.

Keane appears only in Fallout 4.

Retrieved from "https://fallout.fandom.com/wiki/Keane?oldid=3292427"
Community content is available under CC-BY-SA unless otherwise noted.