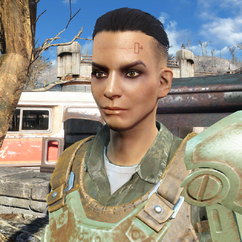 Commander Kaylor is a Gunner commander stationed at the Nuka-World transit center in 2287.

Commander Kaylor leads a team of Gunner mercenaries to investigate the Nuka-Cola Family radio signal originating from the Nuka-World transit center. Her team was ordered to secure the facility and report back to Colonel Cypress for further instructions.[1]

According to her forehead tattoo, Commander Kaylor's blood type is O-positive.

Commander Kaylor appears only in the Fallout 4 add-on Nuka-World.

Retrieved from "https://fallout.fandom.com/wiki/Kaylor?oldid=3178942"
Community content is available under CC-BY-SA unless otherwise noted.