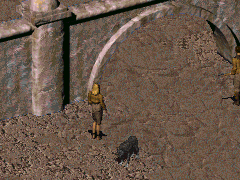 The town greeter, hard at work

“You see Katrina. She has a very pretty smile.”

Katrina is a resident of Shady Sands in 2161. She serves as the town informant and greeter.

Katrina has the job of greeting and helping strangers understand the community. She was raised in Vault 15, in which she had a very boring life. Over time the vault that Katrina lived in became overcrowded, forcing the residents to leave. Many of them gathered their supplies and ventured out into the wastes with no knowledge of the outside world. Apparently, a new life would begin for everyone. However, some stayed behind in the vault which was later attacked by raiders. She escaped the vault and was wounded, but was found by residents of Shady Sands. She has stayed there ever since.

The intention of the developers of Fallout was likely to include her as a tutorial character considering her dialogue is focused around explaining a few fundamental game-play systems, including bartering, healing and the First Aid and Doctor skills.

Talk to Katrina: Upon talking to Katrina, the Vault Dweller can gain 250 XP by asking questions related to the Vault she originated from, and asking for help finding a water chip.

Katrina appears only in Fallout.

Retrieved from "https://fallout.fandom.com/wiki/Katrina?oldid=3130930"
Community content is available under CC-BY-SA unless otherwise noted.