View source
watch 24:51
Fallout Interactive Experience
Do you like this video?
Play Sound
Fallout 76 / Night of the Moth ally

Fallout 76
Night of the Moth

Helps allies
“Science is the foundation for what we do, but not the foundation of why we do it. Gazing up at the stars, I felt a passion I didn't have for other fields. That is not something I will soon forget.”

Katherine "Kat" Swan is a potential lite ally living in Appalachia. She is an astronomer who studies the sky as well as extraterrestrial life. She was unlockable upon reaching rank 25 of Zorbo's Revenge season, and a plan for her was released with the Invaders from Beyond update.

Kat believes human beings to be rather boring and considers humanity a "failed experiment." She wishes to interact with aliens instead, allured by the thrill of discovery itself. As a teenager, she thought about majoring in biology, chemistry or physics. However, she never felt fulfilled learning about them, finding these subjects mundane. When she heard the poem When I heard the learn'd astronomer by Walt Whitman, which she eventually could recite, it changed her outlook to extraterrestrial pursuits.

Her parents met under unusual circumstances. Her mother was a former patient at Allegheny Asylum, although her mother lied to Kat, claiming to be a nurse. This made Kat become concerned if she could develop any mental illnesses herself. Her father worked at Vault-Tec University and needed her mother's help for a project he was working on. He pulled some strings and got her out of the asylum, and she stole a worker's uniform on her way out. Her family died shortly after the Great War which traumatized her, and she managed to comfort herself by the thought that they were spared from the aftermath.

Kat does not react well to being called "crazy," mentioning she wants to slap the Vault Dweller but does not want to get wasteland germs on her palm.

She once travelled to Fort Atlas and was disappointed by what she found. She is suspicious of the Brotherhood of Steel and their motives, especially because they hoard technology.

Kat once had a girlfriend who lied about having the ability to read. She also suspected the woman may be an alien because she said the letter "s" sounds longer than needed. She was disappointed to find out the woman was not. Kat also once had a pet tabby cat, named Herschel after the astronomer Caroline Herschel. She does not doubt the possibility of cats being aliens.

In her free time, she likes to watch sci-fi movies, listen to classical music, drink wine and play board games, enjoying The Legendary Run. She is fond of the constellation Pegasus. She finds clouds depressing because they block stars. She thinks coffee is overrated and does not see the appeal, feeling tea is the superior beverage.

Katherine Swan appears only in Fallout 76, introduced in the Night of the Moth update. 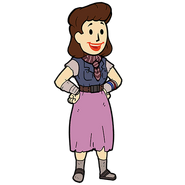