The katana is a weapon added with the Fallout: New Vegas add-on Gun Runners' Arsenal.

A katana is a type of Japanese sword with a blade length greater than 23.6-28.7 inches (60-73 centimeters) and characterized by its distinctive appearance: a curved, slender, single-edged blade, circular or squared guard, and long grip that can accommodate two hands. Often called a "samurai sword" or "samurai's sword" because of its use by the feudal warriors, it became a symbol of the samurai caste.

Renowned for its sharpness and cutting ability, its origins go back at least as far as the Kamakura Period (1185–1333). Most often held with two hands, some techniques and combat styles were performed with a one-handed grip. The katana was generally carried in a saya, or scabbard, manufactured from lightweight wood, with a coat of lacquer on the exterior and a wooden knob on one side for attaching a braided cord.

The single-edged, razor-sharp blade is extremely effective against most enemies, because it has a high attack speed of over three hits per second.

It has a special attack called Unlabored Flawlessness, an attack launched with a reverse grip. It does 250% damage in V.A.T.S. at the cost of 19 more action points (requires a Melee skill of 50).

It is possible to execute Unlabored Flawlessness outside of V.A.T.S. (without the required Melee skill of 50 to perform the move) by initiating a power attack (hold attack button) while moving forward.

The katana can successfully strike about 995 times, or 1,495 times when equipped with the protective sheath, from full condition before breaking.

Katana with all modifications 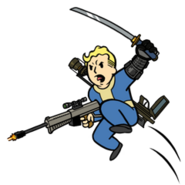 Katana in the achievement image for Master of the Arsenal 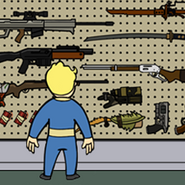